I was editing a keyboard in Keyman Developer 6 today (European Latin) and after using the Character Map in version 6 for a few minutes started to hanker for the version 7 Character Map that I have been using for the last few weeks while preparing for Beta 1.   In the end I had to run over to the test desk and use the version 7 Character Map.  I wanted to use the filter feature – especially the ability to use the * wildcard – I searched for "latin*ligature" so I could find all the Latin ligatures.  No way to do that in version 6. 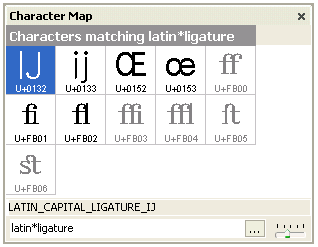 In the image above, you can see some of the characters are in grey rather than black.  This indicates characters missing from the selected font and instead of skipping them, uses a backup font, in this case Code2000.  The character map also uses font linking to try and get a fallback character where one is missing – unfortunately, font linking does not appear to work in the supplementary planes.  James Kass’s Code200x fonts provide great fallback coverage for the Character Map, with only a few scripts (mostly newer ones for the Unicode standard) missing, so we will be including them with Keyman Developer.

Of course, we still need to support showing all the characters in a given font – which is currently broken in beta 1.

The filtering currently supports a single phrase, with * and ? (or % and _) wildcards.  Any SQL fans will recognise the LIKE wildcard terms there.  You can also use [ and ] but we haven’t tested that yet!  I’m not sure how valuable more complex filtering support is.

One other Good Thing: the version 7 Character Map uses Unicode 5.0.