In the last week, I've spent a fair bit of time tidying up the installer.  There were a number of issues I had to resolve, such as problems upgrading when the user's admin status had been removed in between the original install and the upgrade … yep, we've had to deal with this.

I also removed a lot of legacy code supporting Windows 95, 98 and Me: the setup installer for Keyman Desktop 7 needed to support these operating systems, as we still supported them when we released version 7.0.  It was a nice feeling removing that code!

Much of the work over the last week was under the hood and won't be visible to you as an end user, but I have also made what I think is a significant improvement to the installation user experience. 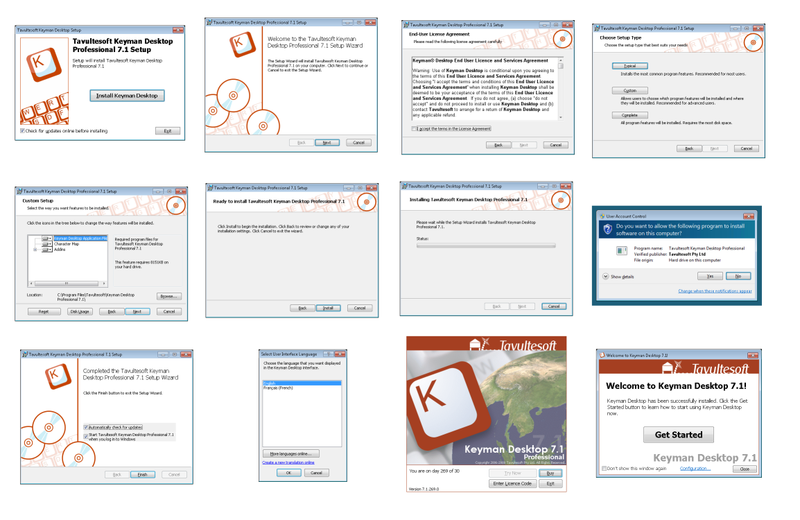 And here's the equivalent in Keyman Desktop 8:

I do feel that's a big improvement.  All the Windows Installer dialogs have been hidden, and the install process now consists of checking a single checkbox to agree to the license, then clicking on the Install Keyman Desktop button. I've removed the 'power user' options from the decision sequence and placed them under the "Install Options" dialog: 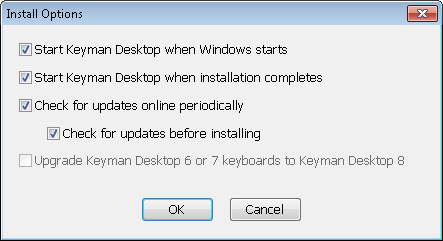 Similarly, the End User License Agreement (do you read all the EULAs you are presented with?) is now printable and easier to read but less intrusive.  The agreement itself hasn't changed!

The user interface language choice has been moved to a consistent and common location both in the Welcome screen and the Keyman Configuration screen.  This has the advantage of being less easily confused with keyboard layout choice: 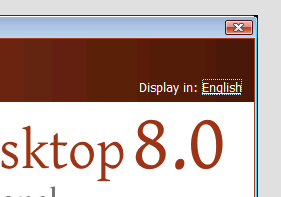 Behind the scenes, Keyman Desktop still uses a Windows Installer .msi package to install, so it can be deployed on networks just as simply as before.  However, for the typical end user, I'm hoping these modifications will make it much simpler to understand the installation process.

For the technically-minded, here are a handful of the more interesting changes among the 30-odd changes and fixes I've made in the last week:

A couple of quick questions,

1) when building a keyboard package, is it possible to control the default locale?

2) Is it possible to localise the installation screens (assuming the default language isn’t English)?

1. It is not currently supported to automatically change the user locale when installing a keyboard package into an existing installation of Keyman Desktop but it would be possible to do this in a standalone installer by specifying a registry key for the desired locale.

2. The install screens can be localised and I hope to publish documentation on this before the release of Keyman 8

It appears that this new version isn’t working in Trillian? Will it support stuff like that, Windows Live Messenger etc.? It should, right?

Dan, did version 7 work with Trillian? I have not tested Keyman 8 with Trillian but I have with Windows Live Messenger and Skype and no problems there.

I like the language switch function to choose different language fonts. Great job.

Introduction to the Roadmap Update: see the latest version of the roadmap This blog post contains the November 2019 update to our roadmap for Keyman. This roadmap depends very much on the resources available to Read more…