For many years, Keyman Desktop has adapted layouts to work more accurately with European hardware keyboards. For example, a US English keyboard has a top alphabetic row of QWERTYUIOP, but a French keyboard has instead AZERTYUIOP. Keyman makes sure that if, for example, you are typing Greek on a French hardware keyboard, the α letter is still on the A key, not on the Q key.

This functionality makes Keyman keyboards far more accessible to European users without needing to design a separate soft layout for every European hardware keyboard. But one area that has always been a challenge has been how to support deadkeys and punctuation characters.

An example might help. On the Norwegian keyboard, ~ (tilde sign) is available only as a deadkey. You can type it by pressing AltGr+¨, followed by Spacebar.

Typing ~ on a Norwegian keyboard

Now, the Greek Galaxie keyboard layout (for typing in Ancient Greek) recognises the ~ (tilde sign) and maps it to the Greek perispomeni diacritic mark in order to type letters such as ᾶ.  On a US English keyboard, you would type a~.

Typing ᾶ with a US hardware keyboard + Keyman Greek

But on the Norwegian keyboard, you would have to type a, AltGr+¨, and then press Spacebar to convert the ~ deadkey into a ~ character.

This gets wearisome! It gets even worse with some languages which have multiple diacritics, for example to type ā̀ on on a Philippines keyboard, you need to type AltGr+¨, Spacebar, Shift+, Spacebar, a:

A feature to make life easier

In version 9.0.481.0 of Keyman Desktop, we have introduced a new feature to resolve this. In Keyman Configuration, we have added an option called Treat hardware deadkeys as plain keys, which is on by default (it cannot be switched off in the Free edition). 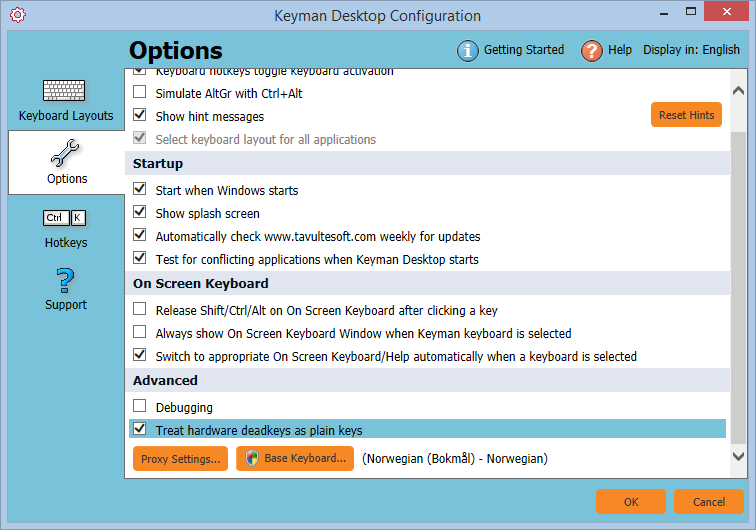 With this option switched on, you can now type the Greek letter ᾶ on a Norwegian keyboard with just a, AltGr+¨

Now: typing ᾶ on a Norwegian keyboard and Keyman Greek

And with the previous example of  ā̀ , this is now typed with AltGr+¨, Shift+, a:

Now: typing ā̀  on a Norwegian keyboard and Keyman Philippines

If you already have Keyman Desktop 9.0 installed, you can check for updates in the Support page of Keyman Configuration.