Have you ever wanted to type in Egyptian hieroglyphs? Today we've released a keyboard which will let you do just that. Christian Casey's Unicode Hieroglyphic keyboard allows you to type Ancient Egyptian on the web and in any application with full Unicode support. 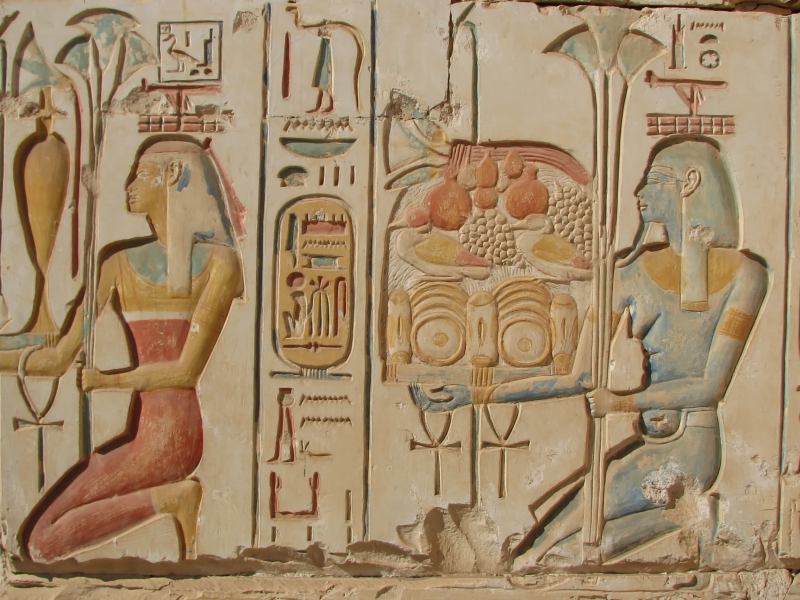 Ancient Egyptian hieroglyphs have a history of use spanning some 4,000 years, from the late Roman empire back to the 3rd millennium BC, which means they share the distinction with Sumerian cuneiform of being older than any other known writing system. For most of their long history, hieroglyphs were usually used for monumental writing and inscriptions. They could be written left-to-right (like English), right-to-left (like Hebrew), or top-to-bottom (like Mongolian), with reading direction indicated by the direction of the faces (you read into the faces, as if conversing with them).

for the 'ch' in loch), some signs indicate entire words (like

for 'flamingo'), some signs explain the reading of other signs (like

to mark a word feminine), and most signs can be read in more than one way. In an effort to make writing aesthetically more beautiful and reading clearer(!), scribes would combine and repeat sound, word, and marker signs to create redundancies when making a word. For example, the word 'birds' can be written

, which is made up of the signs for the sounds in the word birds (

= ꜣpdw), together with the marker for bird (

) and the marker for plural (

Designing a method to type Ancient Egyptian on computers is no easy task, made all the harder by the fact that the Unicode standard didn't admit hieroglyphs until October 2010, in version 6.0. Because of the size and scope of the task, until now the two primary ways to work with hieroglyphs on computers were a) as images or b) in dedicated hieroglyphic text-editors. There was no easy way to type hieroglyphs in, say, an email, a website, a Word document, an Excel spreadsheet, or an Adobe document. The new Hieroglyphic keyboard fills that gap. It allows you to type hundreds of hieroglyphs in all of those situations and more.

The Hieroglyphic keyboard allows you to type Ancient Egyptian in three ways:

You can also output hieroglyphs with this keyboard using their Gardiner number. The Gardiner numbers come from a comprehensive set of sign lists generated in the early part of the last century by the eminent British egyptologist, Sir Alan Gardiner. Together with the MdC method, the Gardiner numbers make it easy to quickly access hundreds of standard hieroglyphs.

5 thoughts on “The Future of Ancient Egyptian — Typing in Hieroglyphs”

Thank you so much for sharing these!

This is really interesting! I am helping a linguistics friend develop a new language for her potential undergraduate honors thesis and am currently trying to make a keyboard (sadly with basic coding skills and fairly little knowledge on how to use the Keyman system to boot). I stumbled upon this web page trying to figure out how the unique blocking system they defined would even work on a keyboard. The links provided on the Manuel de Codage standard is a huge help! Thank you so much for sharing this!! I do have a question though, does the MdC standard only apply to keyboards specifically for hieroglyphs or can it be used universally? Any help would be greatly appreciated, thank you again!!

The MdC standard is really just a textual encoding for hieroglyphs. You could design your own corresponding system and apply it with the Keyman keyboard language. The full source of the Hieroglyphic keyboard is available at https://github.com/keymanapp/keyboards/tree/master/release/h/hieroglyphic/source so you could use that as a starting point for an implementation.

Seems to be a problem with the Keyman Desktop + Hieroglyph download in that anti-virus immediately reports malware found, and then deletes a file that the application needs in order to run.

Apologies for the delayed response — would you believe your comment was caught by the spam filter! We’ve done some work on trying to resolve this issue; this is a false positive that a couple of anti-virus software programs stumbled on, and they have now removed the false detection. Let us know if you continue to have trouble