While on the topic of AddLanguageProfile – Vista changes the behaviour
of this function.  In Windows XP, it would install the TIP across the
user’s currently installed languages, and just to be helpful, add
Chinese (Simplified and Traditional), Japanese, and Korean languages
with the TIP installed for each of those languages.  That’s not too
hard to fix up.  However in Vista, this simple function call will not
only , but will also add every single language installed on the system
to the user’s profile – resulting in the following impressive dialog: 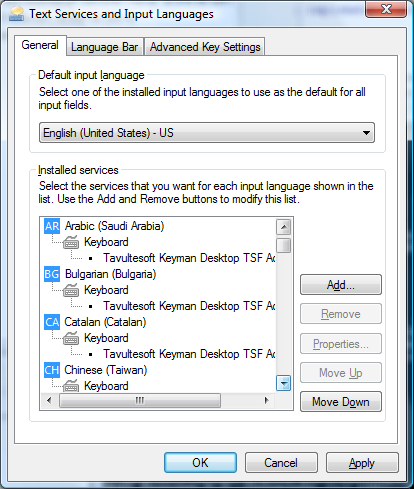 The list of languages goes on seemingly for ever.  Not only does this
list every language – it also lists every sublanguage – Arabic (Saudi
Arabia), Arabic (Iraq), Arabic (Egypt) and so on and so forth.  For
good measure, the languages aren’t installed alphabetically, but rather
in the order of the language identifiers (0x0401 for Arabic (Saudi
Arabia), 0x0402 for Bulgarian)…