So What Is IPA?

IPA stands for International Phonetic Alphabet, the standard phonetic alphabet used worldwide to acurately and consistently record all the sounds in every language. In daily life, you’re most likely to come across the IPA on Wikipedia, in a dictionary, or when learning a new language. It looks like this:

You can find out more about the IPA here.

SIL IPA Unicode provides easy access to every IPA character. Most IPA characters are typed using a base letter in combination with =, <, and >. Most of the remaining keyboard keys give their normal output. This makes SIL IPA Unicode especially well suited for typing mixed IPA + English documents.

IPA Total contains a full range of IPA characters along with a host of arrows and other transcription symbols. Characters are typed by repeat-pressing of the backquote key (`) after a base letter, with shift-key shortcuts for transforming a character based on principles of articulation. For example, pressing 'l' + backquote nine times yields ɮ, but you can reach the same letter pressing 'l' + 'F' (think Fricative key).

The BU Keyboard types not only IPA, but also a variety of Americanist and European characters, currencies, and symbols. The keyboard uses a conventions based approach where the ctrl, alt, and shift combinations have a consistent semantic meaning, making it easier to guess at new combinations once the conventions are mastered.

LingfilSemitica was originally designed for Latin transcriptions of Semitic texts, but has since been expanded to include the full IPA range. The keyboard uses a collection of methods to enter IPA, including combinations, repeat-pressing, and shift state keys. Optimised for Swedish hardware, the keyboard may also be used on other 102-key QWERTY and European keyboards. If you are interested in LingfilSemitica but have a 101-key US QWERTY hardware keyboard, we'd recommend you use instead the partner application LingfilSemitica-US.

Here's a handy chart to compare typing a selection of characters with the four keyboards. The red keys modify the black keys to output the correct IPA symbol. Click the chart to enlarge it. 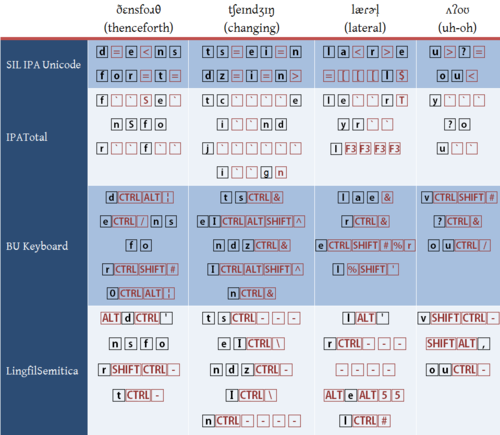 A Word of Advice

When working with IPA keyboards, you may find it easier if you turn off spellchecking and autocorrect.

1 thought on “IPA Gets Mini”

I didn’t realize there was an “International Phonetic Alphabet”, is it a recent development?