Over the last few months, our team has been working hard on developing a native version of Keyman for iOS, which is now available on the Apple App Store as Keyman!

The Keyman app now brings you the power and ease of use of Keyman Desktop to your iPhone, iPad and iPod!  On the first day of release it already supports over 600 languages, from Ancient Greek, to Tamil, to Zulu! Keyman also adds platform features such as touch-and-hold menus, two click language switching, and dynamic keyboard layouts, all built on the world's most powerful input method platform, which we call Keyman Engine.

The Keyman app lets you type and share your message with friends and family instantly on Facebook, Twitter, email or SMS. You can also print your text using the iOS print function if you are so inclined.

Along the way we faced quite a few complex development issues.  One of the biggest was how we could provide support for all the different iOS device shapes and sizes, each with their own ergonomic needs (not to mention landscape versus portait orientations!) and yet not overwhelm a keyboard designer with a multiplicity of target device requirements.  This certainly gave Serkan and John some headaches and late nights at the office. And of course we needed to make sure that the app followed all of Apple's rules and guidelines!

Another thing you may notice with Keyman is it's one of the first Keyman products to fully integrate our new branding. With an updated logo and colour scheme, as well as a cleaner look, we think it looks great (even if we do say so ourselves)!

You can find the Keyman app user guide here: Help for Keyman

Along with the release of Keyman for iOS, we've added 2 new tools for developers – a touch layout designer in Keyman Developer 9.0 for keyboard creators, and the Keyman Touch Engine SDK for iOS developers that want to integrate native keyboards into their iOS apps.

Keyman Developer is the software we built for language experts to build native keyboards compatible with Keyman Desktop and KeymanWeb, and with the upgrade of Keyman Developer from version 8.0 to 9.0, you can also optimise your keyboard layout for the touch environment. One of the best examples of keyboards that use an optimised layout for touch is the Eurolatin keyboard – in Keyman Desktop and KeymanWeb (on desktop browsers) the keyboard appears as a menu based IME, whereas in the Keyman app and KeymanWeb (on mobile browsers) the keyboard employs touch-and-hold keys to access letter variations, which is actually faster and easier to use than on desktop: 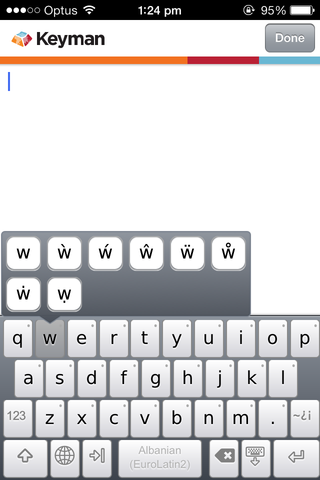 The Keyman Touch Engine SDK lets iOS app developers integrate any of our 600+ Keyman keyboards into their own app in a few easy steps; in fact we used this SDK when we built Keyman ourselves! To learn more about our SDK, click here.

We've got a busy schedule developing and updating the full set of Keyman products, with Keyman for Android in development (good work Serkan!), as well as the pending release of version 9.0 of Keyman Desktop and Developer, bringing a whole slew of new features and improvements to our core Keyman products. KeymanWeb plugin updates for popular blogging and website building platforms such as WordPress, Drupal and more are also underway, helping website owners and developers integrate KeymanWeb 2.0 into their sites.

And of course, we are continually improving existing keyboard layouts and optimising them for mobile devices, for those 1,000 odd languages that we already support!

We're also looking forward to collaborating with other software developers to integrate Keyman into their great products and ideas.

2 thoughts on “Keyman is now available as a native app for iPhone and iPad!”

Any plans for releasing Keyman desktop for Mac OS X?

Hi Tobias, thanks for reading our post! We don’t currently have plans for Keyman for Mac, although it is something our team has discussions about. If we do decide to develop, we’ll let our customers know via Email or another blog post.