If you have used any of the GFF desktop keyboards, you will be used to touching a key twice or holding the Shift key to get a different base consonant from that displayed on the key.  To avoid needing a Shift layer when entering normal text, all the characters from this layer have been moved into touch-hold arrays. In this way, any base syllable character can be output without needing a separate Shift layer.

Most punctuation characters and numerals (on phones) have been moved to a second key layer, and the Geez numerals can be obtained either using multi-key sequences (as with the desktop keyboard), or using the touch-hold array for the numeral.

The second key layer is accessed by touching the bottom left key of the keyboard, on both phones and tablets. You can get back to the base layer by touching this key again.

The purpose of these optimizations is two-fold. We were able to make typing faster, as you can now access most characters without needing to switch between layers. Secondly, we were able to remove some of the keys from the base layer, making the remaining keys larger. Here's a side-by-side comparison of the 'before and after': 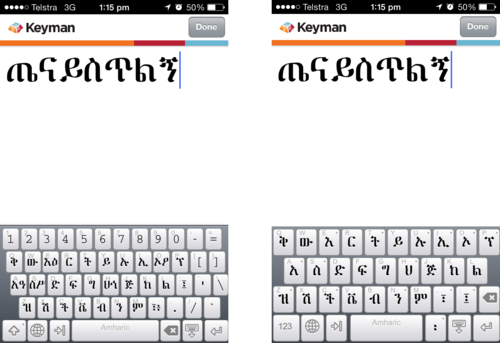 The touch-hold layer is accessed by 2 different yet similar methods, depending on whether you are using the keyboard inside the Keyman for Android or Keyman for iPhone and iPad app, or with any other app (as a system keyboard) on Android.

Below is the 'T' key showing the touch-hold indicator outlined in a red box.

2) In any other app on Android device 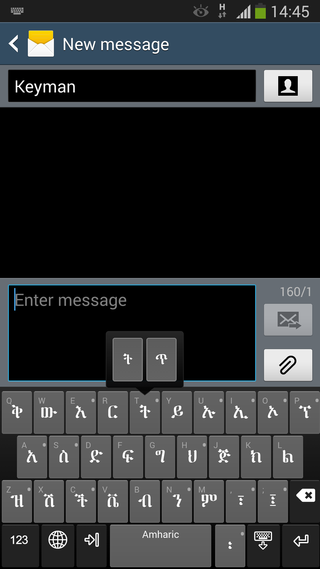 The above screenshot shows the touch-hold layer for the 'T' key on an Android phone.

You can try this keyboard online at www.keymanweb.com as well as installing it on Keyman for iPhone and iPad and Keyman for Android!

Finally, we have a more techincal discussion online about how the Amharic keyboard was adapted for touch layouts, and how you can do this yourself for any desktop keyboard layout!